The EACD are a long weekend of open craft workshops and craft demonstrations both of private craft companies next door and of education and cultural institutions dedicated to crafts in one way or another. Especially for craft companies and local creative actors, the EACD are an instrument of self-help, because it encourages them to exercise their communication muscles and develop new ideas for their marketing. The event takes place in the beginning of April each year simultaneously throughout Europe and is intensively promoted and organised by the European craft organisations.

Arts & Crafts and creative craft trades create quality, preserve cultural heritage, ensure local education, employment and tax revenue, are creative, sustainable and shape identity. Developed in France, in 2002, by government and craft chambers to promote the more than 280 métiers d'art, the JEMA grew into a popular mass event. In 2017, 7,500 workshops and 700 cultural and educational institutions in France brought 1.3 million visitors, most of them families who make use of the opportunity to look over the shoulders of the craft experts. Europeanised since 2012, the event is coordinated by the Institut nationale des métiers d'art (INMA) in Paris. Organisation on the ground can be central, or, are in the case of Germany, bottom-up with the regional craft chambers playing the central role in organisation and funding. Currently, more than 11 European countries participate.

• because it makes the diversity of craft skills and craft culture in Europe visible and tangible to the public,

• because it raises awareness of craft VET among children, young people, and parents,

• because it is highly inclusive,

• because promotes cooperation between local creative actors and craft organisations,

• and because it’s a successful tool to support local creative economy.

On occasion of the implementation of the large-scale event in Germany (ETAK) from 9-11 April 2021, FEMP honorary member and SOAS Emeritus Professor Trevor MARCHAND gave a preview for the German audience on his new publication “The Pursuit of Pleasurable Work: Craftwork in 21st century England” focussing on the importance of tacit knowledge and craft vocational education and training as a source for problem solving and as a means against de-qualification.

The interview was conducted by FEMP member Zentralverband des Deutschen Handwerks. You can download it below in full length.

For details on Trevor Marchand's groundbreaking book, follow this link.

FEMP at ICOMOS conference “Promoting Europe’s Cultural Heritage and Cultural Diversity – Who? How? With Whom?”

On 13-14 July 2020, FEMP was able to contribute to the ICOMOS International Conference and Hearing on ICOMOS and EU, European Quality Principles for EU-Funded Interventions with Potential Impact Upon Cultural Heritage, 2019

FEMP pointed out the problematic character of the Quality Principles, which pose the danger of ousting craftspeople from restoration and conservation, as well as the danger of EU funding for unqualified low-cost companies.

In preserving cultural heritage, the national vocational training organisation and regulation must be taken into account, as well as national craft and trade law, tax law, social law, occupational safety law and national legislation against undeclared work. These nationally distinctive legal, professional organisation and cooperation conventions have formed the basis for the implementation of monument conservation and cultural heritage preservation in the EU Member States since the 19th century and therefore fall under national competence.

Even though heritage policy was not prepared to recognise the concerns of FEMP and craft representatives, these concerns fell on fertile ground with heritage lawyers. Still, an adequate perception and appreciation of the economic dimension of cultural heritage, of the crafts and of the industrial relations by the representatives of the cultural heritage sector remains the great challenge for the future.

From 16 to 18 May 2019, FEMP members were hosted at the XXIII Croatian Symposium of Stonemasons at the Stonemasons’ School Klesarska Škola in Pučišća on the Island of Brač, Croatia.

The Dalmatian Island of Brač, Elaphousa of the Greek or Bretia or Brattia of Roman Antiquity, which is reached via Split, is renowned for its white limestone and its age-long experience of quarrying and stone masoning. Limestone from the island of Brač was used, among other things, on Diocletian's Palace in Split, on the medieval bell towers and cathedrals of Šibenik and Trogir, the White House in Washington, D.C., the Parliament and the Neue Hofburg in Vienna, the Budapest Parliament, and the Governor's Palace in Trieste.

Several types of natural stone are quarried on Brač. The most important quarries are in the coastal zone, because in past centuries the transport of raw blocks and workpieces was made much easier by the landing of ships. Some quarries are in the southern part of the island. In Pučišća, in the south of the island, stonemasons founded the "First Dalmatian Stonemasons' Cooperative" in 1902. As a result, an increased need for training developed in a short time. Klesarska Škola Brač reflects this great tradition. Today, it offers boarding courses to professional artisans and craft conservators at various qualification levels. It also holds summer schools for lay persons.

FEMP presented its Charter "Craft Conservation and Restoration in Europe (Berlin Manifesto, 2018)", which promotes a business-oriented approach to the development of the European restoration market and the cross-border exchange of craftspeople and craft enterprises dedicated to the conservation and restoration of cultural heritage.

Restoration and preservation of historical monuments can bring growth

On the occasion of the European Cultural Heritage Year, international experts discussed the opportunities for a systematic development of the restoration market and the restoration economy in Europe at the European Craft Congress "Cultural Heritage Craft in Europe" at the Haus des Deutschen Handwerks in Berlin. There is agreement that the preservation of historical monuments and the preservation of cultural heritage in Europe must be considered more economically than in the past and promoted as a sustainable economic factor. Historic preservation must also be seen as a market if it is to generate growth and employment. To this end, it is suggested that exchange platforms for cultural heritage management be set up within the European craft organisations in order to promote market development. The Berlin Manifesto, which has been adopted, identifies long-standing mistakes in current cultural heritage policy, calls for an end to the discrimination of craftsmen in the cultural heritage sector and a paradigm shift in European cultural heritage policy.

Future of Craft Conservation in Europe

As part of the European Year of Cultural Heritage, international experts exchanged views on the chances of a systematic development of the restoration market and the restoration industry in Europe at the European Crafts Congress "Craft Heritage and Heritage Craft Trades in Europe" at the House of German Crafts in Berlin. They agreed that craft preservation of historic monuments and the preservation of cultural heritage in Europe should be based on economic thinking rather than on cultural principles and should be promoted as a sustainable economic factor. If monument preservation is to provide growth and employment, as heritage politics have  agreed on long since, it must be considered as a market. It is suggested that European craft organisations set up platforms for an exchange between sectorial experts, like monument offices and museums, and the cultural heritage craft trades in order to develop the market. The adopted Berlin Manifesto identifies long-term undesirable developments in the current cultural heritage policy, encourages an end to the discrimination of artisans in the cultural heritage sector and promotes a paradigm shift in European cultural heritage policy.


The instruments currently adopted by the German craft organisation to develop the field of cross-border restoration and monument preservation were presented at the congress on Wednesday, 12th September. They cover a range from Italo-German craft chamber cooperations to mobilise craftspeople, business journeys for restoration companies to explore the market in the United Kingdom, to the joint stands of restoration businesses at the DENKMAL trade fair Moscow (RU), at  MONUMENTO trade fair Salzburg (AT), and Heritage Preservation International Shanghai (CN)  as part of the federal foreign trade fair program.


With an estimated volume of the European restoration market at over € 35 billion a year, the potential of the market is highly promising. However, it was critisised that the restoration industry at European level is still not systematically recorded, even though powerful research institutes such as Ifh Göttingen have long since developed the necessary methodology. At the same time, it was emphasised that, in addition to the interest in other markets, craftsmanship always includes cooperation with local artisans and heritage institutions. Focus is on exchange and mutual learning.


A panel discussion highlighted the connection between material cultural heritage and intangible cultural heritage, craft know-how in mind and hands. The discussion pointed out that, despite ERASMUS +, there is hardly any cross-border promotion of higher VET. Craftsmen still have to pay for the costs of courses on the preservation of Monuments themselves, which may exceed 6,000 euros. Tight timing regulations of ERASMUS + often make it impossible for master craftsmen to pursue a publicly funded contuing VET. The craft trades demand for equal treatment with academics.


Artisans are also disadvantaged in the exercise of their profession by restoration bans (as, for example, in Italy and in public museums in France). Questionable cultural heritage standards question experienced craftsmen's skills and hinder the daily work on the construction site. Craftsmen's views are hardly represented in the International council of monuments ICOMOS as well as in the publicly funded restoration center ICCROM. This deficit at the highest level must be corrected, because practical errors in restoration can be excluded only with an economic-technical expertise. Cultural heritage will be able to generate that sustainable growth and heritage preservation gain acceptance it deserves in society only when vocational training and trade promotion experience of craft organisations is taken into account in cultural heritage policy and craftsmen are taken seriously.

In the European Year of Cultural Heritage, craft trade and craft-related organisations in Europe and Germany joined forces to raise public awareness for the dual nature of heritage and to address urgent safeguarding issues.

An international conference addressed challenges and opportunities of craft conservation in Europe.

A regional craft conservation working committee was founded at Berlin chamber of craft trades comprising businesses active in the field and stakeholders.

The open general assembly of FEMP saw a lively and in-depth discussion of the outcome of the international conference. As a result, the declaration "Craft Conservation and Restoration in Europe (Berlin Manifesto)" (see above) was published.

The official ceremony for the inscription of Organ Craftsmanship and Music on the UNESCO Representative List of the Intangible Cultural Heritage of Humanity marked the end of the congress.

Craft trades inscribed on the German Inventory of Intangible Cultural Heritage presented topics of safeguarding and vocational education and training (VET) in a supporting exhibition.

The candidature of FEMP as observer to the Steering Committee for Culture, Heritage and Landscape of the Council of Europe was accepted. The next meeting is scheduled for spring 2017. This will be an opportunity to draw the attention of Europe to the objectives of the FEMP and to issues related to training and preservation of heritage trades.

It is also in Leipzig that, in November 2010, the foundations of the FEMP were laid, the various training centers for heritage skills then present wishing to pool their energies and skills through a European network. 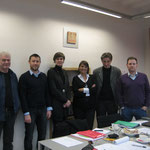 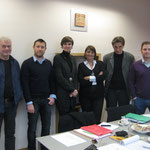 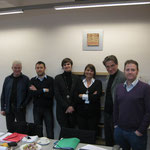 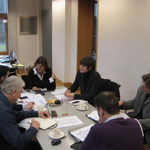 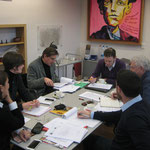 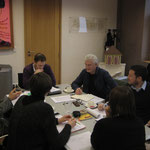 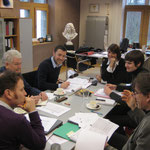 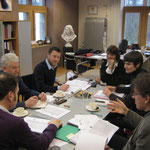 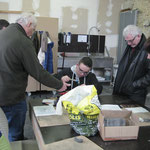 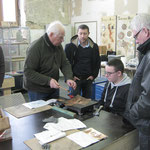 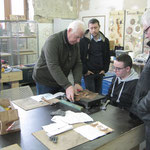 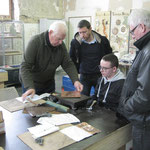 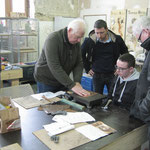 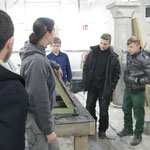 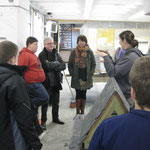 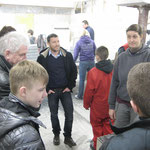 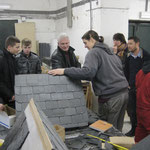 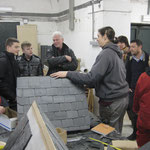 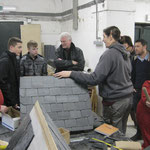 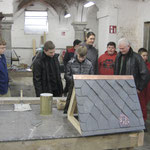 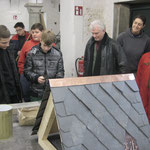 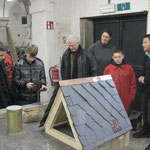 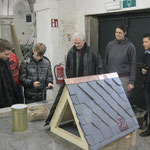